Calls to Action in Colorado and Oregon. Trump says something about vaping. Kellyanne Conway sounds confused. DC rally and #15sec4vape. Jacob Sullum editorial. The more you know about laws based on lies. Other happenings around the country in Wisconsin, California, Colorado, California and Florida.

BREAKING NEWS: (NATIONAL) President Trump told reporters today that his administration supports a national Tobacco/Vapor 21 law; will release its final plans for restricting e-cigarettes next week. Details on the proposed flavor ban have yet to appear.

Contrary to misleading headlines claiming “vape shops likely to be exempted,” Conway says “nothing’s changed” about the planned flavor ban, especially since the JAMA data that was released yesterday is “much more harrowing and concerning than we would have suspected.” She told reporters that the HHS “will be making an announcement soon.”

MULTNOMAH COUNTY, OR: (CALL TO ACTION UPDATE!) DOH presented county commissioners with options for restricting the sale of flavored vapor/tobacco products. Plan to attend HEARINGS on Nov 12th & Dec 10th & use this CTA to submit your objections NOW!

IN THE NEWS: (CALIFORNIA) Some communities are (wisely) deciding to nix bans on sales of e-cigarettes for the time being.

“I don’t think government is the answer to the problem.”
–Kern County Supervisor Mick Gleason

Meanwhile, few FL adults who smoke have embraced the far lower risk alternative, so adult smoking rates are still at 16.1%.

Supporters of the FDA’s ban on flavored e-cigarettes claim “a whole generation of young people” is “addicted to these products.” The government’s own survey data show that’s not true.

As the FDA Prepares to Ban E-Cigarette Flavors, the Government’s Own Data Contradict Wild Claims About Adolescent Nicotine Addiction

THE MORE YOU KNOW: Every time lawmakers pass a law or tax on vaping based on lies, it reinforces those lies in the minds of the general public. Then those same lies, now called “facts,” will inevitably be used to pass more restrictive laws and higher taxes.

This is why CASAA does not say “Well, at least it’s better than a flavor ban or all-out ban,” when lawmakers try to pass sin taxes, Tobacco/Vapor 21 or public use bans. Those are all based on lies, which will become accepted as “truth,” that will eventually be used against us. It’s already happened.

GOLDEN, CO: (CALL TO ACTION) Trump announcement or not, we must keep fighting! City Council is expected to set a public hearing date for Dec 5th for a proposed FLAVOR BAN and Tobacco/Vapor 21. Plan to attend & contact your mayor and city council TODAY!

ADVOCACY: Can’t make the DC Rally? #15sec4vape testimonial videos are popping up everywhere on Facebook and Twitter! Share your #15sec4vape video today and tag @CASAAmedia so we can see it, too! 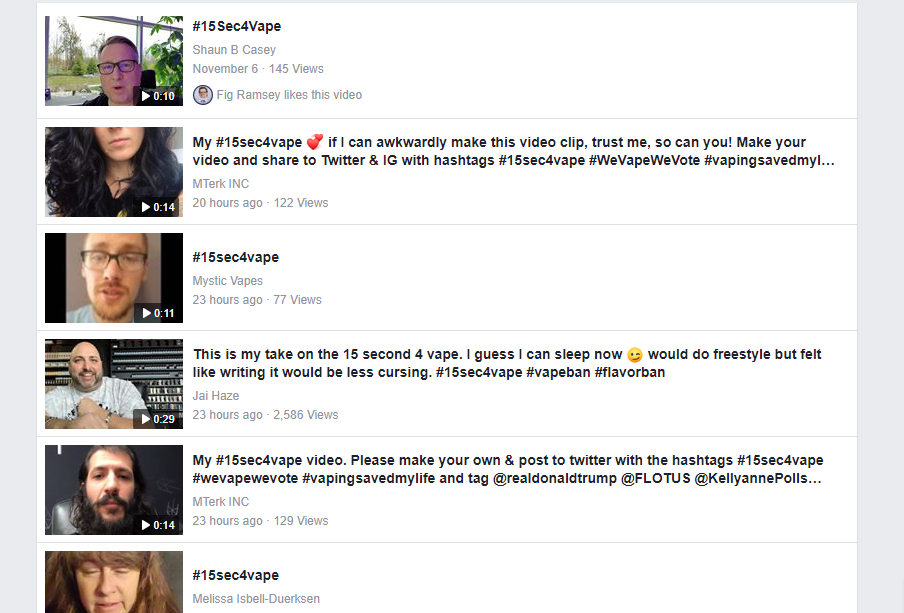