Now that Vapor4Life has shut down it’s operations, it is important for long-time Vapor4Life customers to find the best long term solution for their eJuice needs. If you are looking for the remaining Vapor4Life e Juice on the market, look no further than the Magic Mist online vape store. The Magic Mist still has 23 of Vapor4Life’s top selling e Liquid flavors available for sale.

Even though some of Vapor4Life’s most popular coffee e Juice flavors are still available for purchase at the Magic Mist, there are other coffee vape juice alternatives for customers that prefer a bold coffee flavor. Fans of sweet coffee vape juice flavors can still find Vapor4Life Classic Caramel Mocha Frappe, Vanilla Mocha Frappe e Juice, and Vapor4Life Coffee Mocha Frappe e Juice available for purchase at the Magic Mist, but the top-selling Coffee eJuice flavor is no longer available for purchase. One great alternative for vapers that enjoy the same taste, experience and price of the Coffee Vapor4Life e Juice is the Magic Mist Coffee e Liquid. Magic Mist Coffee e Liquid is also sold in a 30mL bottle, has a similar PG/VG ratio (which is vital for a consistent vaping experience) and is offered in very similar nicotine options.

Now that Vapor4Life’s business is permanently closed, the exclusive retailer of Vapor4Life menthol vape juice is the Magic Mist online vape shop. While popular flavors like Vapor4Life New Menthol eJuice and Vapor4Life Menthol e Juice are still available for sale at Magic Mist, there are tremendous alternatives available at the Magic Mist for high PG menthol e Juice flavors. The Green Mint and Menthol Magic Mist e-Liquids are ideal for Vapor4Life customers looking for an e Juice alternative that is here to stay. Green Mint is a slightly sweet, yet refreshing mint flavor that is an ideal e Liquid to try for former Super Mint and Peppermint vapers. The Menthol Magic Mist e Juice is an exemplary pick for long-time Vapor4Life menthol vapers due to it’s similar PG/VG ratio, nicotine options, and flavor profile.

Due to new regulatory changes, it is becoming more important to find the best tobacco vape juice flavors for your refillable vape device. The Magic Mist offers a wide variety of tobacco e Juice flavors for former smokers and long time vapers alike. Longtime smokers will often make the switch to vaping with a tobacco flavor in order to ease the transition.

It is important to use a tobacco vape liquid that works best with the vape device that you choose to vape with. The resistance of the tank coil, size of the e-Juice intake holes on the coil, and power of the device all should factor into your e Juice selection decision. For example, Magic Mist Blank Cartridges work best with high PG e-Liquids like The Magic Mist Tobacco e Juice or Vapor4Life Outlaw Blend e Juice.

Magic Mist’s Tobacco e-Liquid is sold in an original blend that contains a higher PG mix, as well as a High Vapor e-Liquid that contains a higher VG content and is designed for sub-ohm vape tank use. The original blend tends to work best with low wattage devices, while the High Vapor e Juice works best with vape mods with sub-ohm tanks. The High Vapor mix will provide a smoother hit and sweeter taste.

The Vapor4Life WOW Oasis e Juice was created 11 years ago by the flavorists at Vapor4Life and has been a top selling tobacco vape flavor ever since. The Turkish tobacco flavoring mimics a popular Turkish tobacco cigarette in order to make the transition an easier one for smokers.

Vapor4Life e-liquid is still a top selling eJuice for former smokers and vapers who use high resistance blank cartridges and vapor clearomizers. When selecting between Vapor4Life’s eJuice on our website, you’ll notice some flavors are available in “WOW” and others are available in “Premium.” The WOW eJuice bottles have a blue label and the Premium e Juice bottles have a black label. You may be wondering, “What’s the difference between WOW and Premium E-Juice?” Don’t worry; you’re not alone. Customers have asked us to explain the difference between WOW and Premium E-Juice, so I’m going to outline the differences so you can make an informed purchasing decision. All Vapor4Life e-Liquids work great with high resistance tanks and low wattage vape devices like the Magic Mist EGO Vape Kit.

As the name suggests, most e-cigarette users say “wow” when they tried this e-liquid. Like Vapor4Life Premium E-Juice, WOW E-Liquid is full of flavor and gives you a throat hit that feels like taking a drag off of a cigarette. Here are a few features of Vapor4Life WOW E-Juice.

The VG/PG level for both the WOW and Premium E-Juices is 25 VG/75 PG, so they’re a great pick for former smokers who switch to vapor cigarettes.

Posted in All posts | Comments Off on Vapor4Life e Juice Explained

This is another reason why CASAA opposes incl. vaping in smoking bans. May seem “reasonable” to prohibit vaping where smoking is banned, but locations ALREADY have the right to prohibit vaping & bans are expanding into other public & private areas without any scientific or rational basis!

However, on the plus side, the report contradicts common ANTZ claim that there is “no evidence” that vaping helps adults quit smoking (says there IS evidence) and admits adults who completely replace smoking with vaping can achieve “meaningful health benefits.”

Sorry, we’re still laughing too hard at the oxymoron of “Rutgers University” & “vaping expert” to read the whole PR, but have seen enough past “research” coming from RU to know it’s based on ANTZ ideology rather than truth-seeking.

For added reference to Rutgers University’s “expertise,” watch this video of a RU student researcher seeking assistance at a vape shop for a leaking tank – caused by firing the device without providing any airflow – and admitting RU “hates vaping.”

Read WHO’s blatant misinformation here: E-cigarettes: how risky are they? 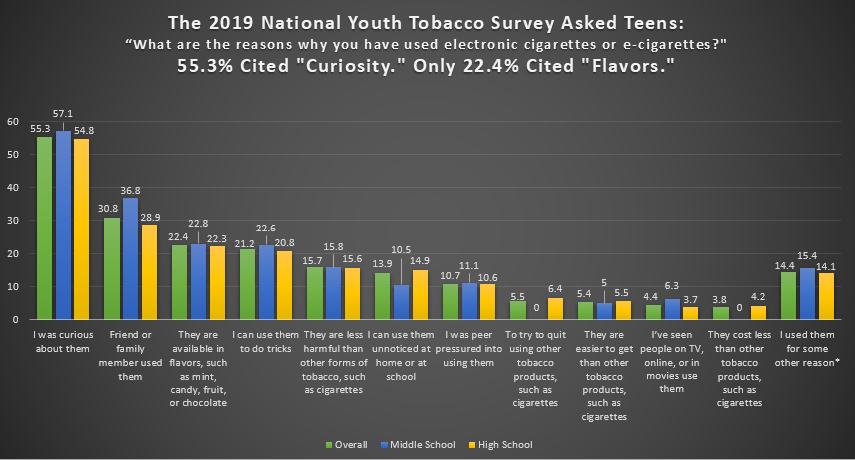 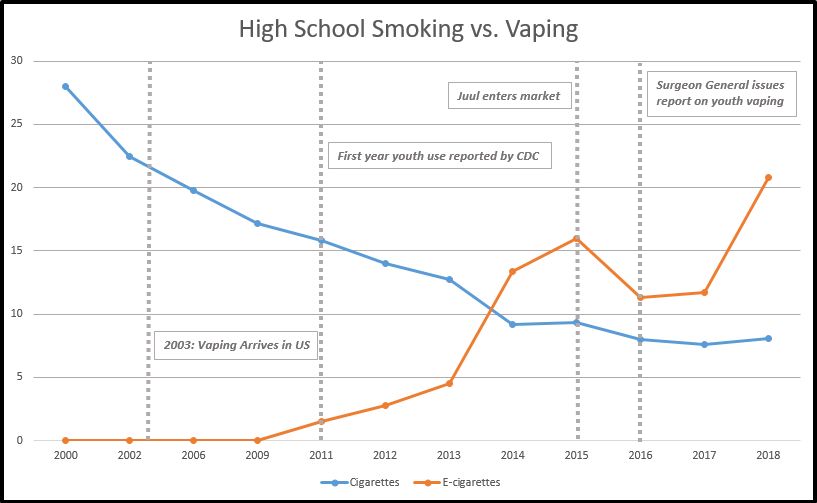 This morning, CBS Sunday Morning ran an article focusing on rising suicide rates and suicide prevention (I promise this will relate to vaping). One of the key points made in the article was all about just how far a simple gesture can go toward preventing tragedy; like asking if someone is okay or acknowledging the pain they might be feeling. We may often take for granted these tiny moments of outreach, but for those on the receiving end of compassion and concern these interactions can literally be the difference between life and death. I immediately made the connection between the significance of these brief connections that can prevent suicied and similar maybe even smaller moments that we experience in vape shops every day.

As many state legislatures begin their 2020 session this month, we are seeing an all-out assault on access to the diverse range of flavored vapor products. These policy assaults directly affect our access to vape shops too. Specifically, we are tracking at least 50 bills across 18 states that would prohibit the sale of vapor products in flavors other than tobacco and menthol (a few states are going as far as banning menthol too). A flavor ban doesn’t just make it more difficult for people to switch to vaping, it means that dedicated vapor retailers will be forced out of business. Shutting down vape shops is a direct assault on our community and the informal support system that we have built.

When CASAA issues a call to action, we provide suggested talking points to help our members make personalized and compelling arguments to officials. While we can’t tell you word-for-word what to write, I believe that one of the most compelling (but underrated) points is the free support that many of us have experienced by talking with other customers in a vape shop. Even if it’s something as simple as hearing “you can do this and I’m happy to share what worked for me.” If we lose the vape shop, we lose this peer-to-peer support.

New York, Washington, Florida, and New Hampshire are at the top of the list this weekend for states needing engagement from advocates. In your comments to officials, please take a moment to recount any experiences you’ve had in your local vape shop (or even in online forums and Facebook) where you received or provided support from a fellow vaper/someone who used to smoke. Our lawmakers still need to hear that vaping is a harm reduction movement driven by the PEOPLE who benefit from these products the most: Consumers.

P.S., Do you have your CASAA I Vape, I Vote State Shirt yet? Check out our New Store!

This article was originally published at CASAA
Author: Alex Clark

Posted in All posts, e cigarettes, News, news-all, newsletter, Smokeless Tobacco, Vaping, Vaping News | Comments Off on Weekend Heads Up Round Up – 01.19.20

Bloomberg vows to ban flavored e-cigarettes if elected president
_______________________________________________________________________
VAPE JUNK SCIENCE: This “study” ignores the fact that the drug use and smoking rates dropped even with vaping experimentation increasing over the same time period. If vaping was a gateway, there would have been an increase in use. Additionally, there is NOT a “substantial body of research” showing vapers “have greater odds of going on to try conventional cigarettes.” The scant existing research purporting to show this is based on unreliable, self-reported cross-sectional data that doesn’t ask if the subject vaped or smoked first, nor does it prove that the subjects wouldn’t have smoked in absence of vaping. 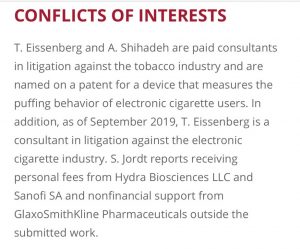